History Of The American Bison

Where Did The American Buffalo Come From & How Many Where There?

Although science hasn't been able to determine for sure where the American buffalo came from, the common consensus is that our native buffalo traveled to North America over a land bridge from Asia. Their populations continued to rise and their range spread in America for thousands of years. To give you an idea of how incredible the growth of the American bison was, consider that buffalo cows usually give birth once a year, nurse for up to a year, and then typically live only 20 years.

Before European settlers began to heavily harvest and hunt buffalo, it's probable that they ranged as far south as Mexico and as far east as the Atlantic, but most of the buffalo population was centered on the Great Plains between the Mississippi and the Rockies. During this time it's estimated that buffalo populations grew from around 25 million up to an estimated maximum population of 70 million. That being said, we have no way of verifying these estimates because we didn't begin tracking buffalo populations until after years of hunting. 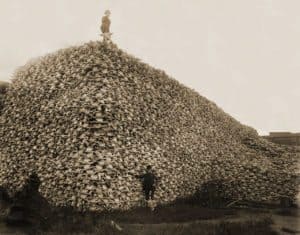 That hunting continued for decades, driven by the economy and buffalo trade, until buffalo populations plummeted and the survival of the species was threatened. Westward expansion in the early part of the 1800s was particularly damaging to the buffalo herds of the plains, when buffalo eradication became systematic. Buffalo hunting parties during this time killed up to 250 buffalo a day. In addition, newly constructed railroads advertised hunting buffalo from their windows and allowed passengers to kill them during their trips.

If you want an idea of just how many buffalo were killed during this period take a look at the picture to the right, which is from the Burton Historical Collection in the Detroit Public Library. By the 1880s buffalo hunters had destroyed so much of the population that it's estimated the remaining wild bison numbered in the low hundreds.

Thankfully, modern conservation efforts have helped the buffalo population recover, and it is estimated that at the present day there are approximately 500,000 buffalo on private lands and around 30,000 buffalo in public herds. Hi Mountain Bison & Buffalo Hunts is proud to be a part of this conservation effort. Our own herd began with just a few animals, but now boasts over 70 head of buffalo that we continue to bolster through our yearly breeding. Our goal is to help ensure that our visitors will continue to be able to enjoy the majesty of the American bison for years, and still be able to hunt them like the pioneers and mountain men of the old American West.

If you have any additional questions for us about the history of the American bison, please get in contact with us. We love our buffalo and their history.

All Hunts Are Done In Utah.