Why You Should Eat Buffalo Meat 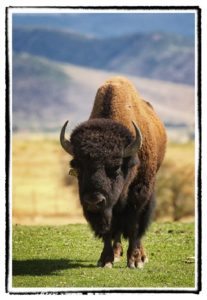 If you've never eaten buffalo meat before, chances are you don't know very much about it.

What you don't know is that bison meat is an excellent alternative to beef, and has several compelling reasons that make it a great choice for your home. These reasons include bison meat's nutritional value, great taste, sustainability, and ease of preparation.

Although this may surprise you, buffalo meat is actually much lower in fat and calories than other meats you're used to eating, including poultry and fish.

In addition, 100 grams of buffalo meat amounts to 143 calories, which is half that of choice beef (283 calories) and still lower than most other meats. For example, 100 grams of chicken would be 190 calories, pork would be 212, select beef is 201 calories, and 100 grams of sockeye salmon is 216 calories.

What does that mean for you though?

While buffalo meat contains around the same amount of protein that other meats do, it is higher in iron, lower in cholesterol, and has more vitamin B-12 than most meats.

Add that to it's low fat content and low calorie count, and eating buffalo means two things for you. One, you can enjoy your meal without worrying about your health, and two, you can eat more buffalo than you would be able to other meats without having to feel guilty. What hunter wouldn't love an excuse to eat more meat, especially with how good buffalo meat tastes?

Any recipe you would use to cook beef or elk works great to cook bison, as long as you follow the suggestions below.

Because bison does not have the fat cap you usually find on most other red meats it tends to cook faster, which means it doesn't take long to prepare your buffalo meat meal. That being said, because buffalo cooks so easily you should take care not to overcook it. 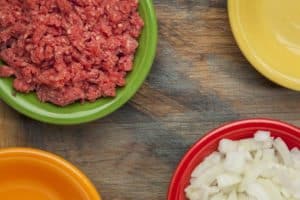 As long as you cook your bison at a lower temperature than you would a comparable cut of beef, you should be fine, and can expect about the same cooking time. But keep this in mind if you're in a hurry and want your meat to cook faster.

We also recommend you cook your buffalo until it is medium rare or rare so that it stays moist and enjoyable, making sure that you cook it to at least 160 degrees Fahrenheit for safety reasons. After you've finished cooking, we also suggest you let the meat rest for 10 minutes to allow it to reabsorb moisture.

If you plan on cooking buffalo roasts or solid cuts, they cook best in ovens preheated to 275 degrees using moist cooking techniques and cooked, again, til medium rare.

If you plan on grilling, broiling, or barbecuing tender cuts or ground buffalo meat, its probably a good idea for you to move the grate an extra inch or two away from the heat, and paying attention to make sure that the buffalo doesn't overcook.

Because bison is native to North America and adapted to thrive in the climate and geography of the Western plains, it makes an excellent choice for hunters that love the land and want to preserve it for future generations.

Buffalo haven't been bred and domesticated (buffalo can't be domesticated, for one thing) like beef herds have, buffalo produce much higher concentrations of protein per gram than other meat animals. That means that it is environmentally cheaper to produce a gram of protein from a bison, since less grass or grain is needed.

Because bison are adapted to thrive on native grasses, they don't need special pasture or grain to grow, so the growth of feed crops are significantly reduced for buffalo herds, if feed crops are used at all. Even when buffalo are fed on grain, that grain is higher in roughage because of the buffalo digestive tracts, which means you get more bang for your buck.

Another reason buffalo meat is more sustainable than cattle is that buffalo themselves consume about 20 percent less water than cattle. They're energy efficient. Bison also tend to move through watered area because they retain prey instincts, which means that they cause less wear and tear on the land and decrease erosion.

Buffalo are also grown without growth hormones, which means that you don't have to worry that they've been raised unethically.

Any way you slice it, buffalo meat is a great way to go, and we know that you'll have a great time harvesting your own buffalo and enjoying the meat. Get in contact with us with any questions you have, or reserve your buffalo hunt today.

All Hunts Are Done In Utah.